The forecast was for a lovely day (indeed it almost got too warm later), so it’s back to East London to continue with the Capital Ring Walk. This section is shared with the Jubilee Greenway walk, so it was a joint effort today.

We returned to Hackney Wick station, again via Stratford, and joined the River Lee Navigation by the Olympic Park: 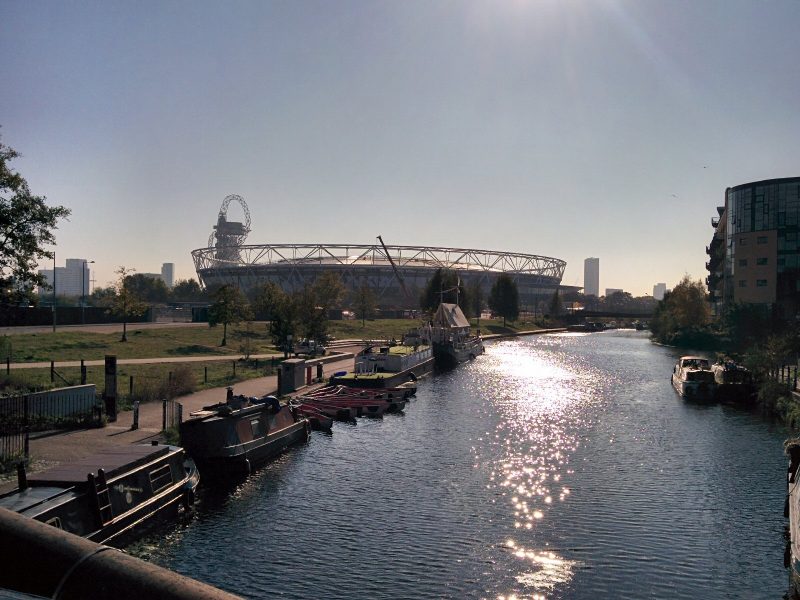 Everywhere in this area seems to be a building site: 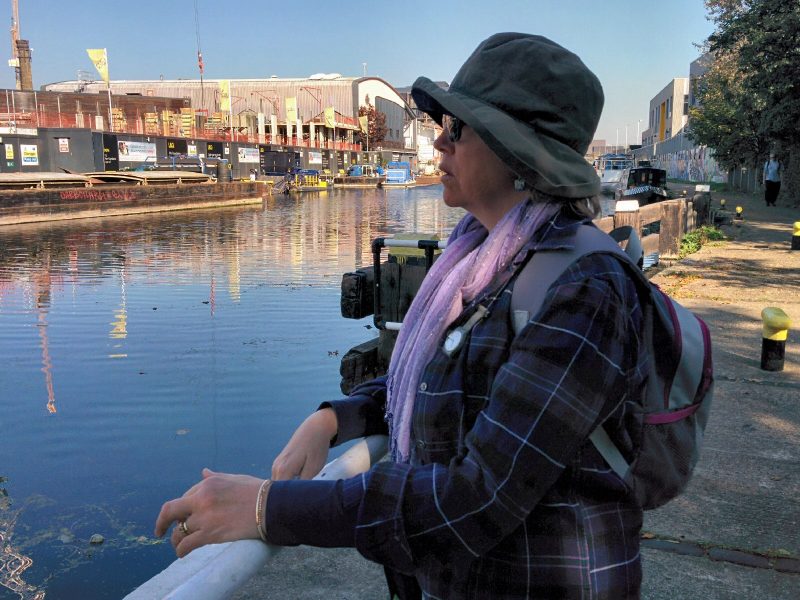 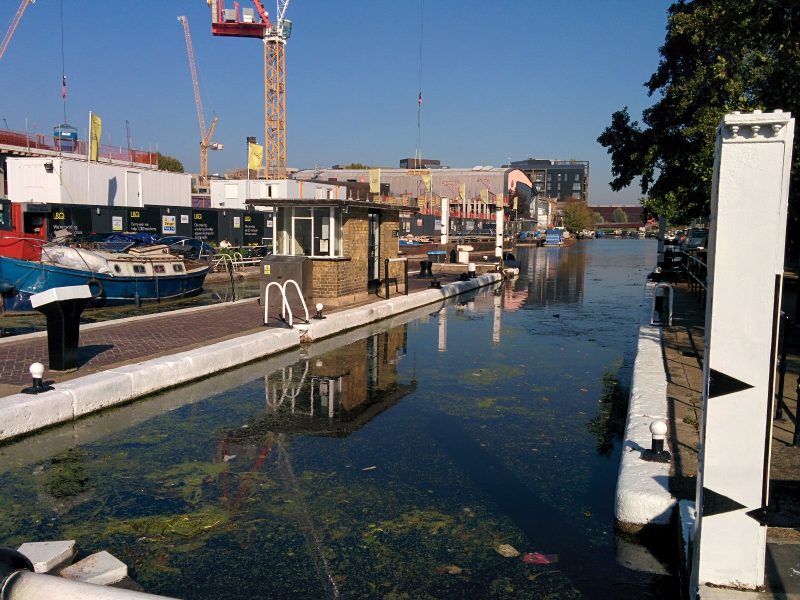 and a bridge covered with what we termed “3D Grafitti”: 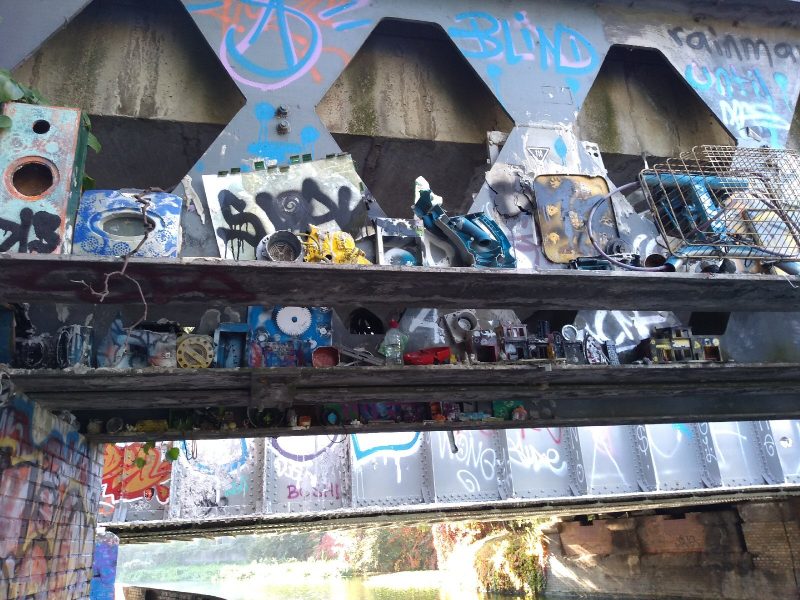 We left the water for “The Greenway”: 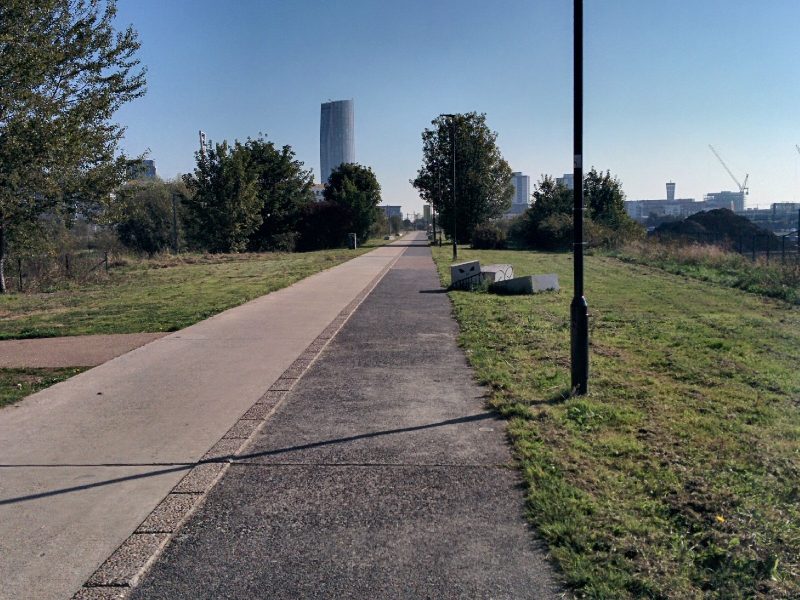 “The Greenway is on top of the Northern Outfall Sewage Embankment. It runs for nearly 6 miles (9.6 kilometres) from Hackney to Beckton where the sewage is treated before discharge into the River Thames. It forms part of London’s extensive sewage system put in place by Joseph Bazalgette in the 1860s and much of it is still in use today. The Capital Ring follows this elevated pathway for nearly 3 miles (4.8 kilometres) with great views of the Olympic Park.”

And sure enough, the West Ham stadium and the Arcelor Mittal Tower comes into view: 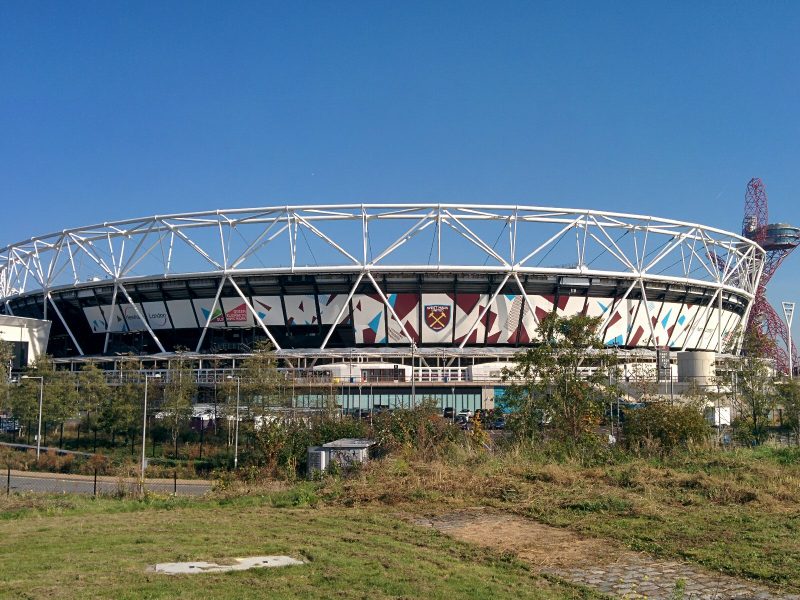 and an interesting café; time for a break! 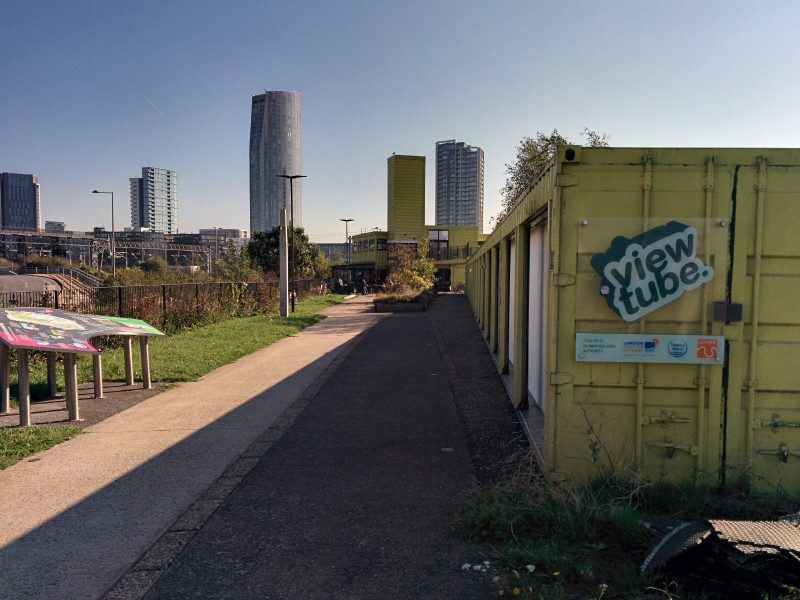 The Greenway should continue on from here, but building work forced us to divert off into the grim ‘real’ East End. It wouldn’t have been a problem if the diversion had been signposted, but we ended up retracing our steps a few times in order to get back on route: 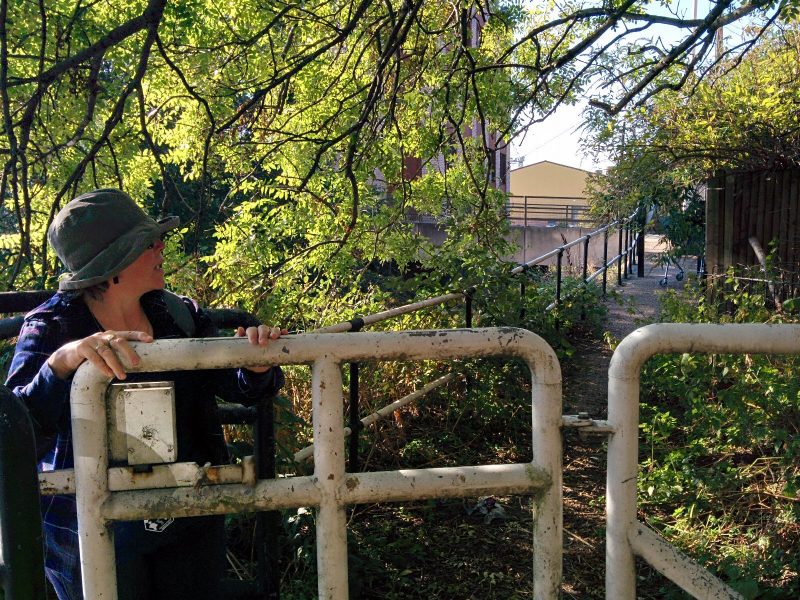 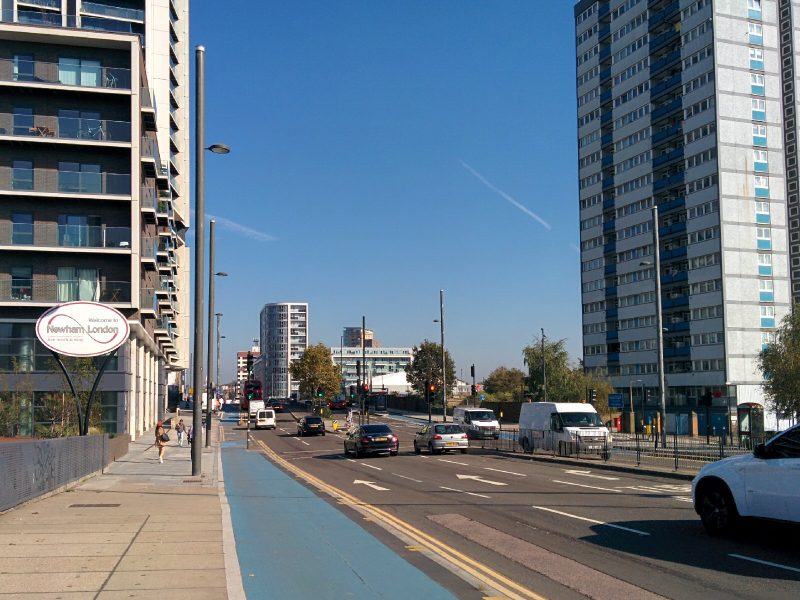 Shortly afterwards, we passed the Meridian, marked by a metal strip and a sundial set in the path: 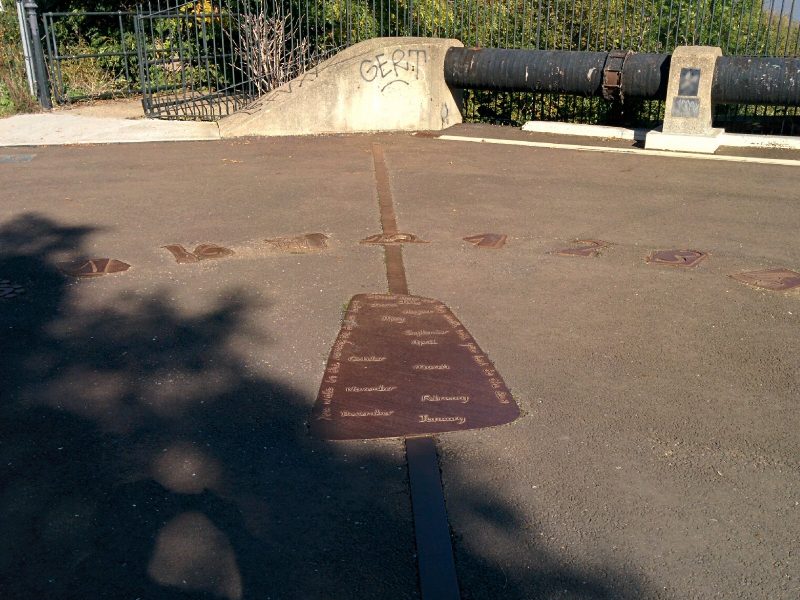 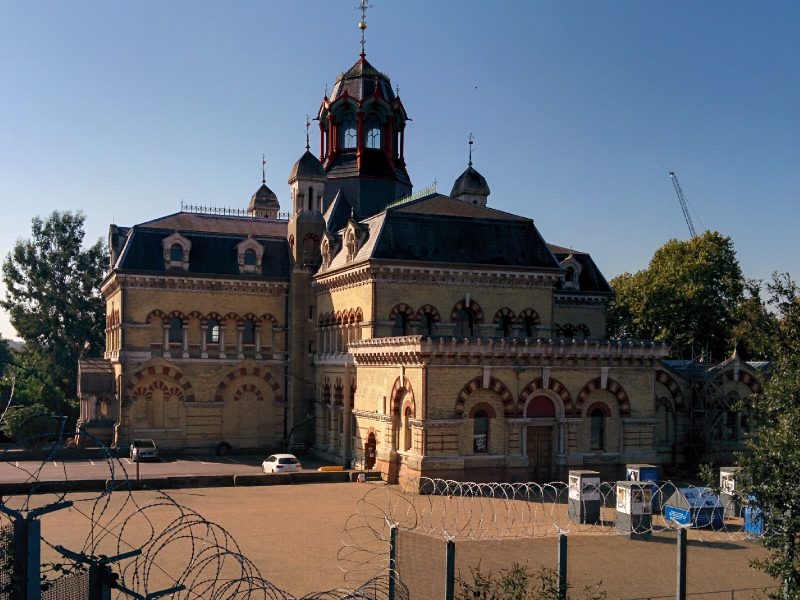 “The Abbey Mills Pumping Station is a palatial structure also built by Bazalgette in 1868. As the new sewers operated by gravity, by the time sewage had reached the East End, it was over 13 metres underground. So, to get the waste back up to the surface, steam-powered pumping stations were built, like Abbey Mills, which was in use until 1996, when it was replaced by the shining silver building nearby. However, the old pumping station is still used during heavy storms and its historic pumps, now electric, are used around 30 days
a year. With its ornamental Gothic architecture, the old pumping station is used as a location for TV and film, featuring in episodes of ‘The Bill’, ‘Londons Burning’, ‘Hogfather’ and ‘Batman Begins’.”

Nearby was an old pump, colourfully repainted: 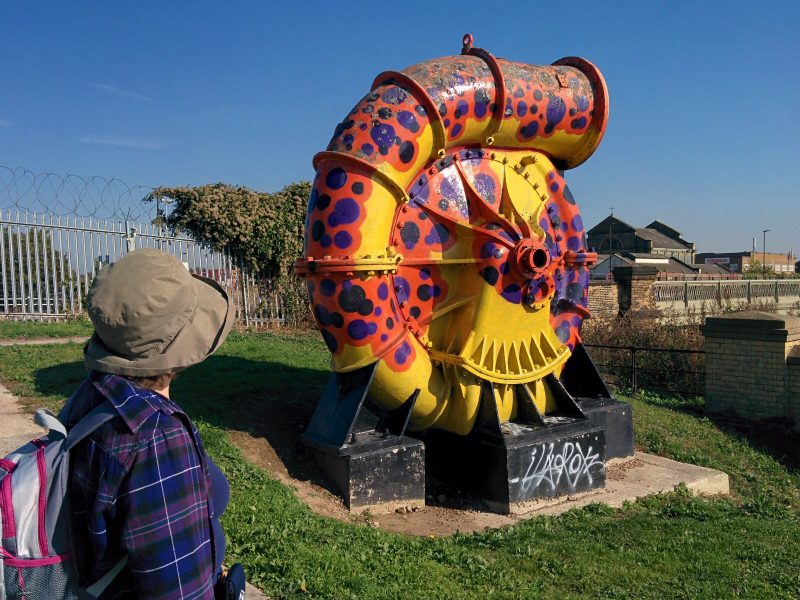 Much effort seems to have been put into “artistic” structures along The Greenway, less effort into information boards and seats: 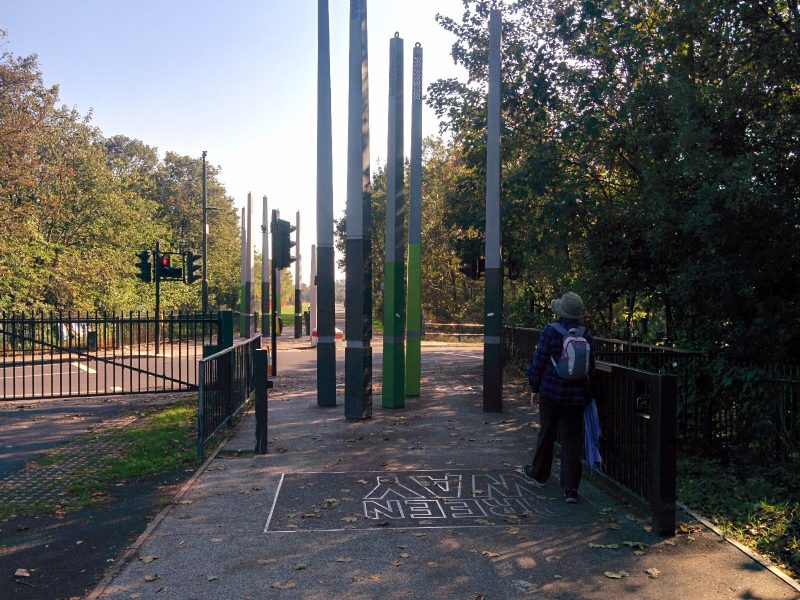 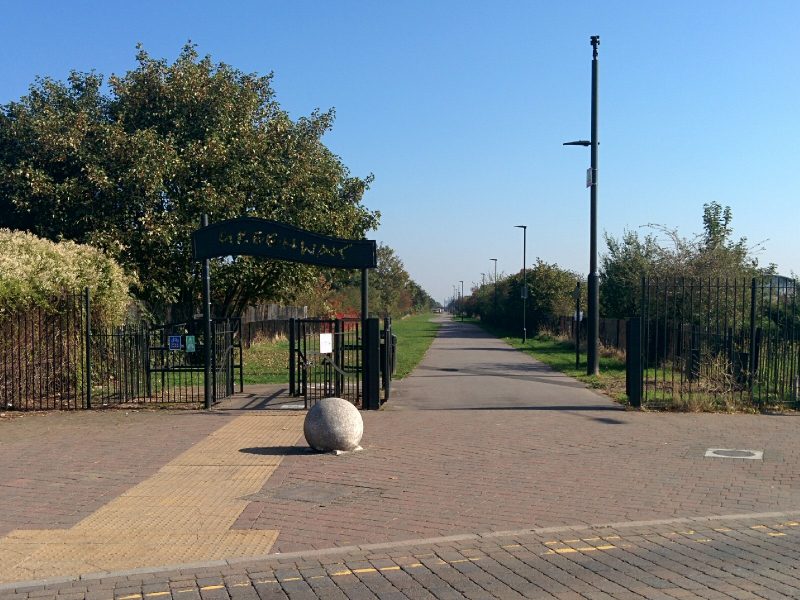 Eventually, we left The Greenway for the real world, including crossing the very busy A13: 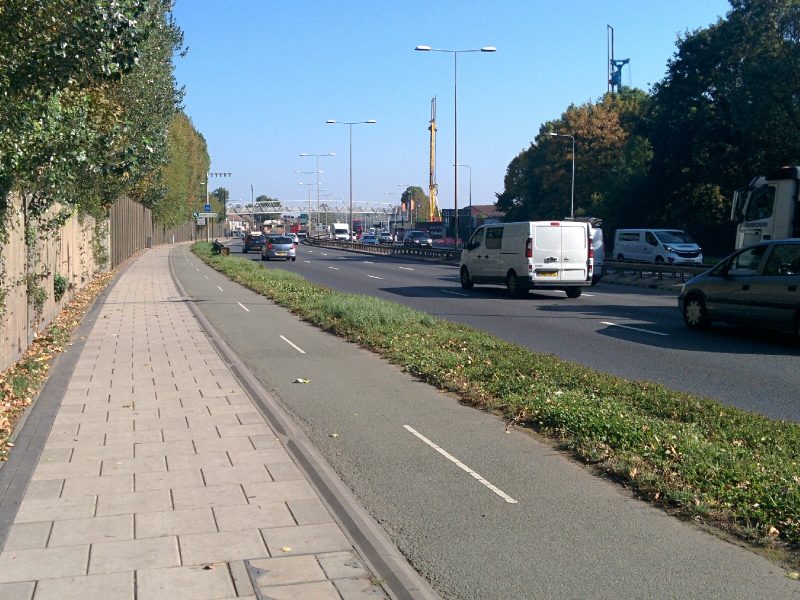 The character of the walk then changed as we followed paths through various Beckton parks: 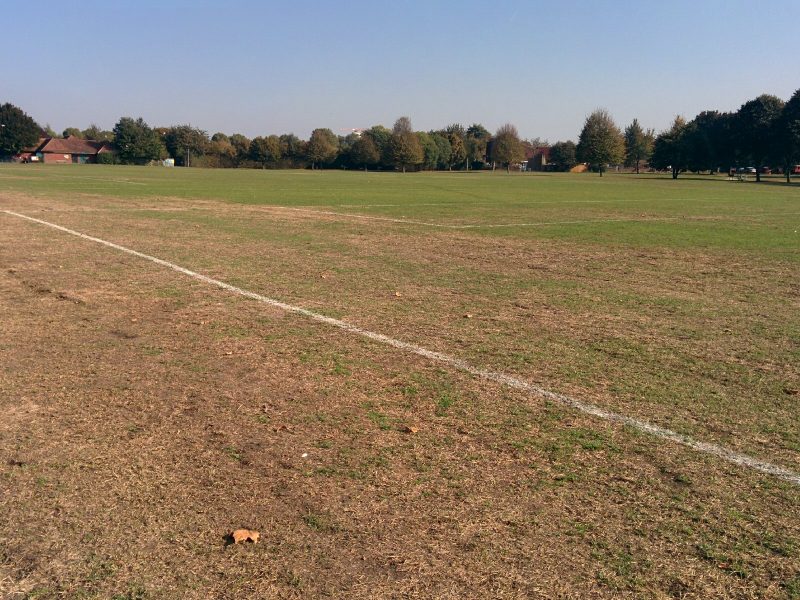 and shortly afterwards, we reached Cyprus DLR station and the train home. 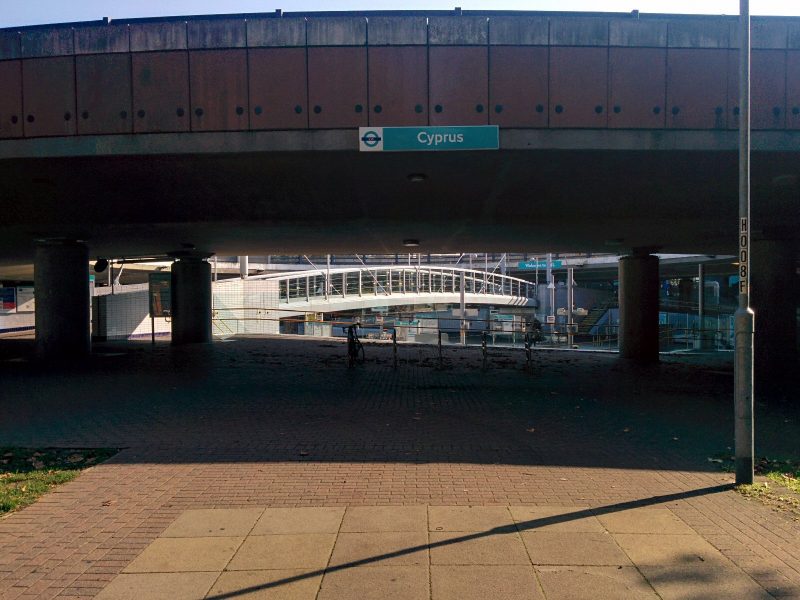 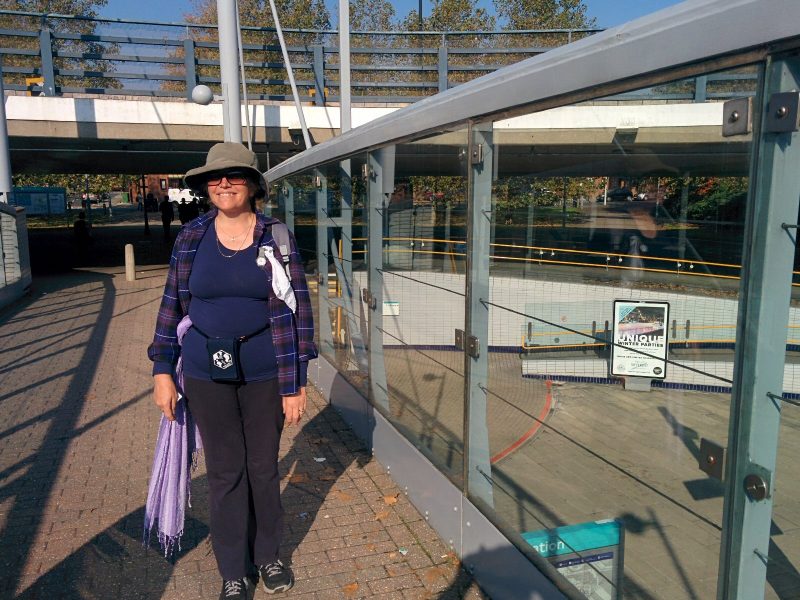 “Cyprus station is named after the nearby Victorian estate of Cyprus, itself named after the British colonisation of that Mediterranean island. This is the station for the
University of East London (UEL).”

6 miles of Capital Ring walking (including a short part of Section 15) today.