The weather has finally warmed up enough for me to continue the Capital Ring Walk.

It’s an easy and fast journey via Waterloo to Earlsfield Station, where I finished last December. Outside the station, it’s usual London busy traffic: 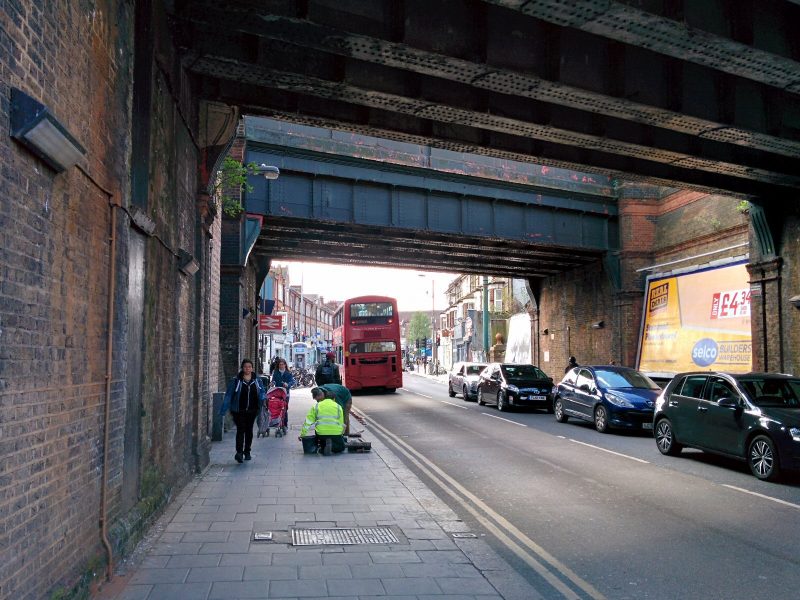 But suburban roads are soon reached, then the route crossed the River Wandle: 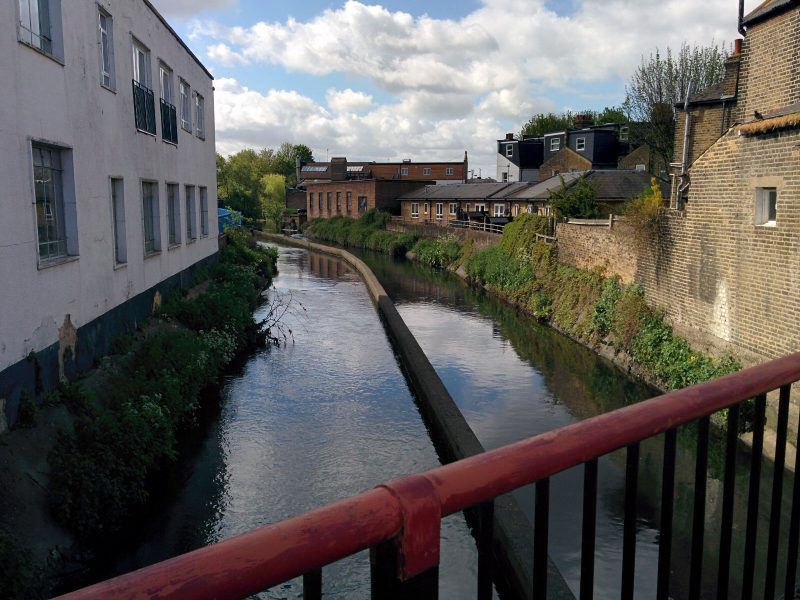 “The Wandle, which gives its name to Wandsworth, is one of the fastest flowing rivers in the London area with a drop of 200 feet in just ten miles. It powered many watermills which produced flour, metal, leather, paper, textiles and even gunpowder.” 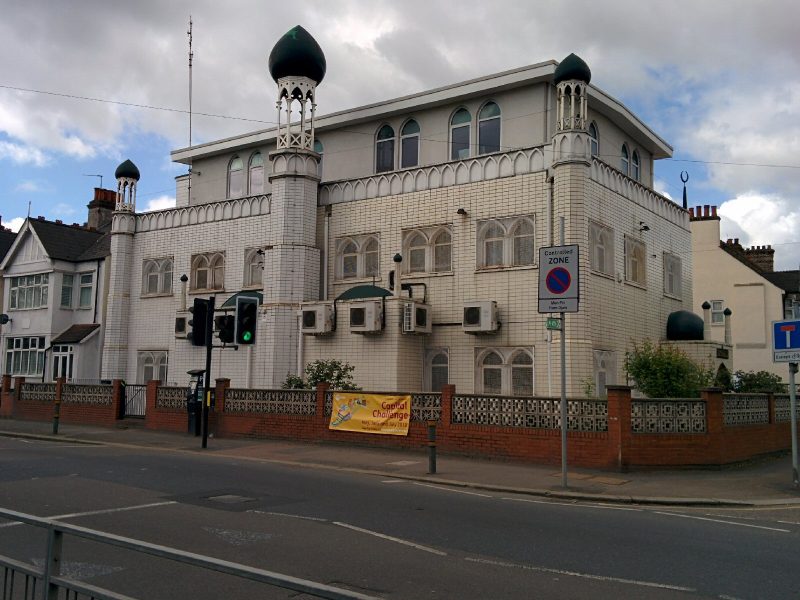 Then on to Wimbledon Park Underground station and the end of Section 5: 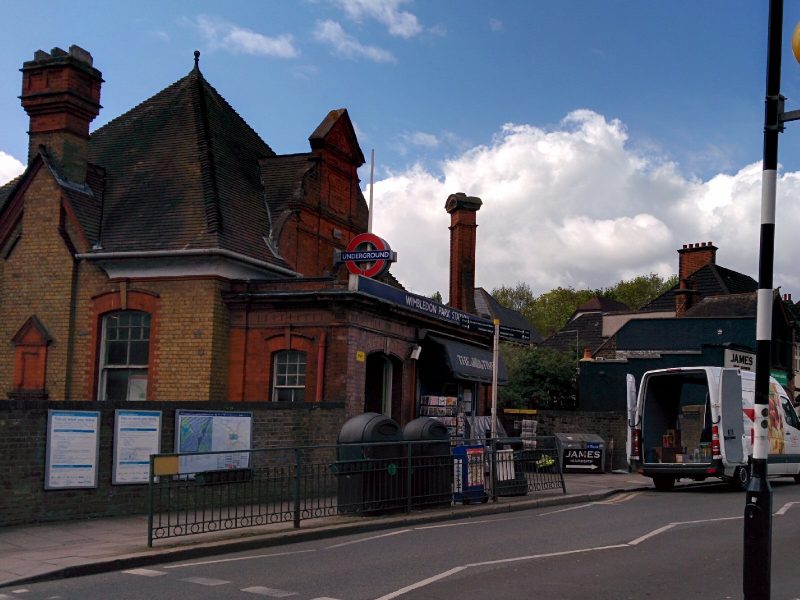 Wimbledon Park itself isn’t far away: 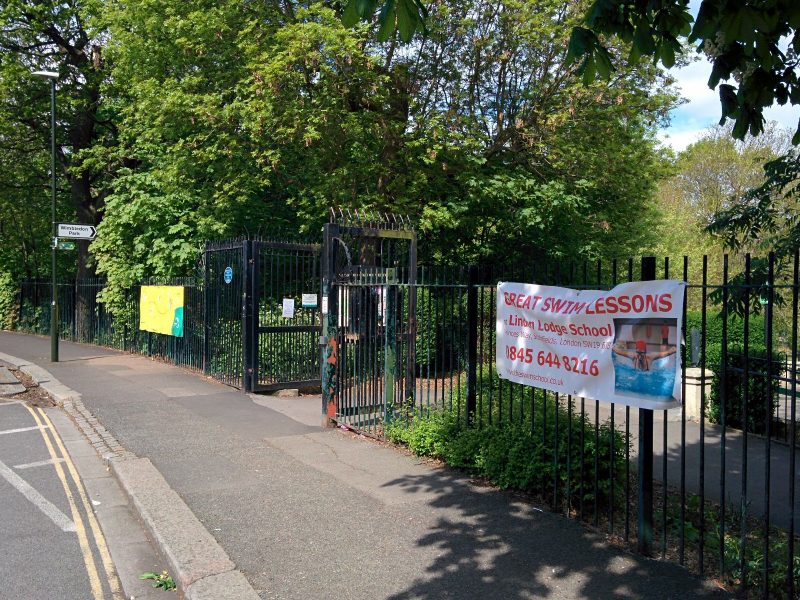 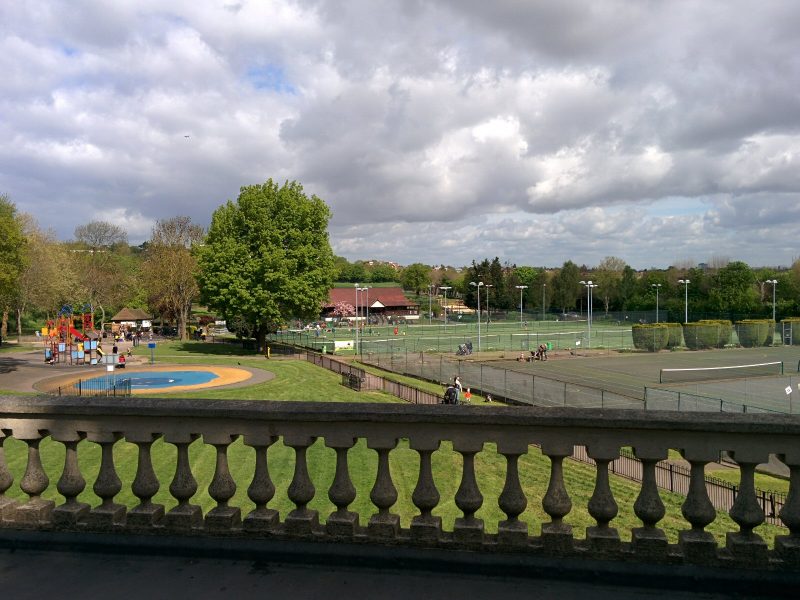 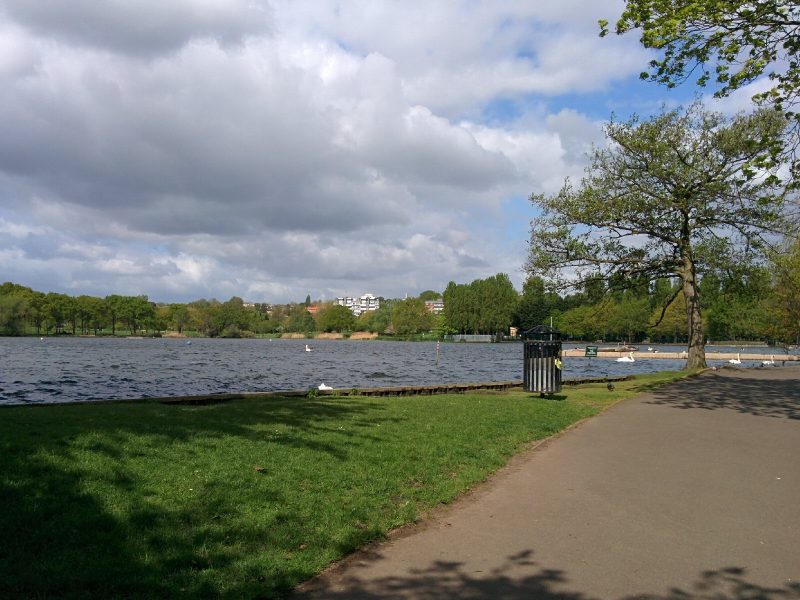 “Wimbledon Park dates from the 16th century; then it formed part of the extensive grounds of the earliest Wimbledon Manor House and was used for deer hunting and hawking. It is more famous for its modern use, as across the lake you can see the All England Lawn Tennis and Croquet Club.”

All too soon, it’s back to suburban streets, albeit leafy and posh: 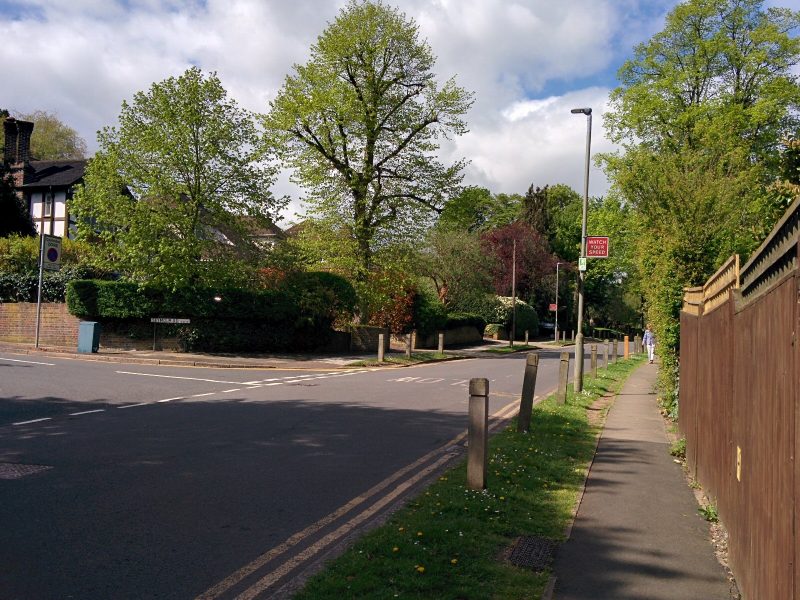 A busy road crossing leads to the countryside of Wimbledon Common: 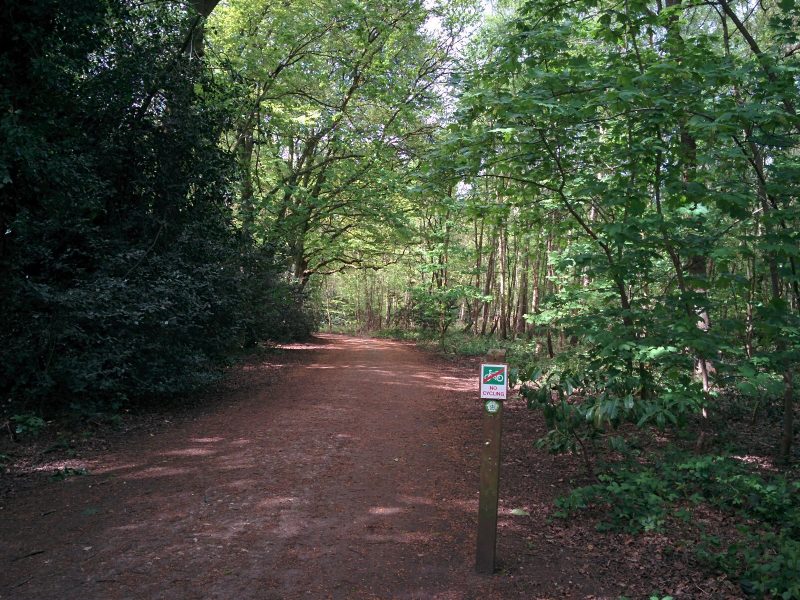 With its famous Windmill: 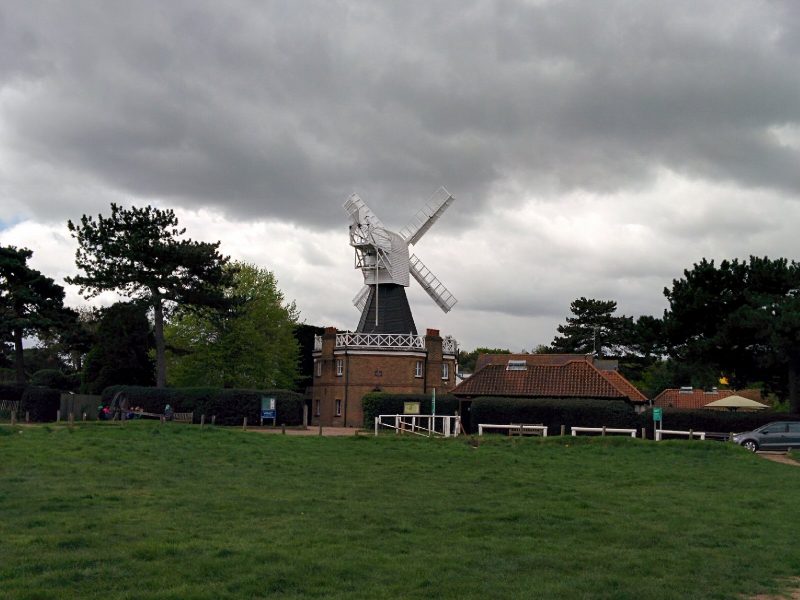 “Wimbledon Windmill is the last remaining hollow post flour mill in the country. In this unusual design the main body of the mill, with all its machinery, turned on a central post, through which a hole was bored for a drive shaft taking power to the machinery.”

And once some golfers had been dodged, Queensmere Lake: 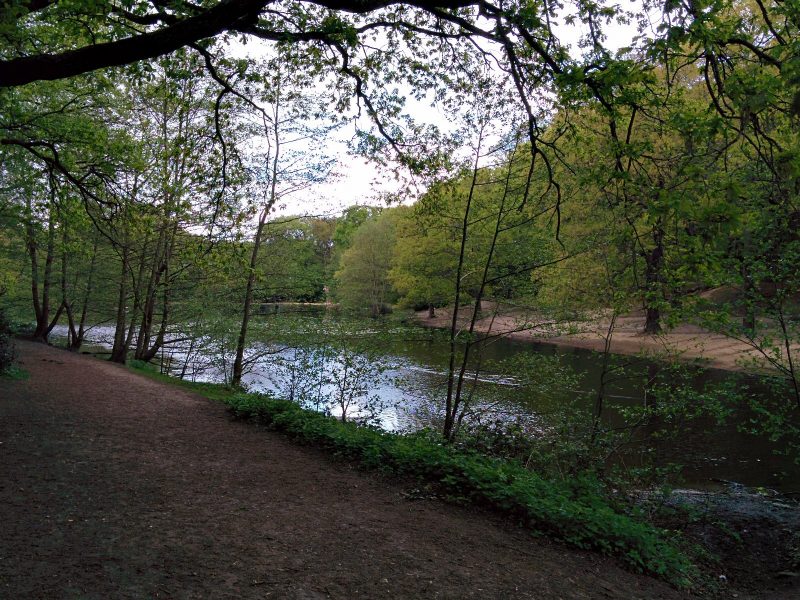 Crossing the A3 was the next challenge, with a combined pedestrian/cyclist/horse crossing: 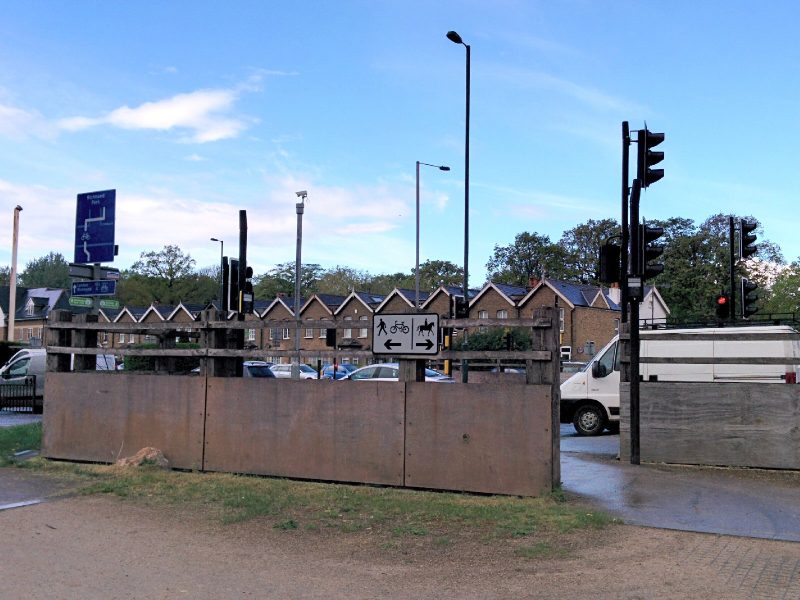 Notice the conveniently high push button on the right for the horse riders!

Then we’re into Richmond Park: 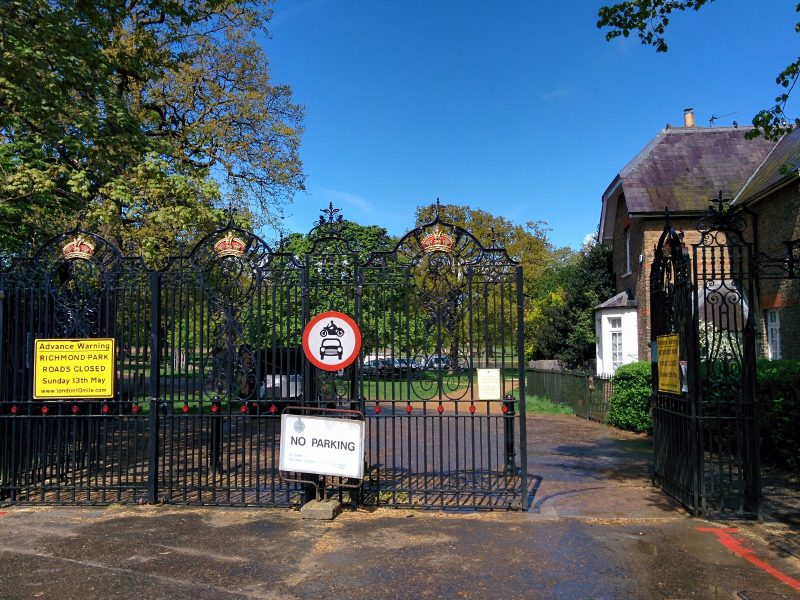 “Richmond Park is London’s largest Royal Park, covering 2,500 acres. It is a national nature reserve and has been designated as a Site of Special Scientific Interest; it is also Europe’s largest urban park. It has some ancient trees with the oldest oaks some 700 years old.” 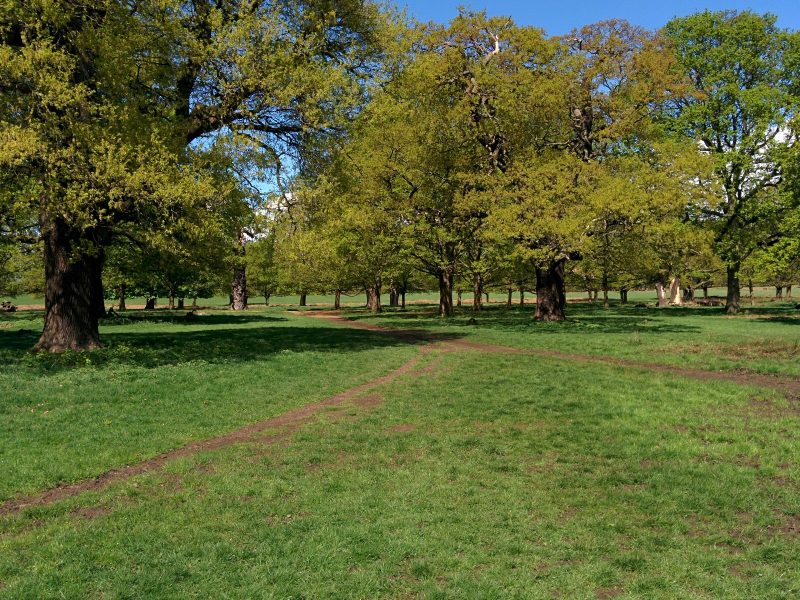 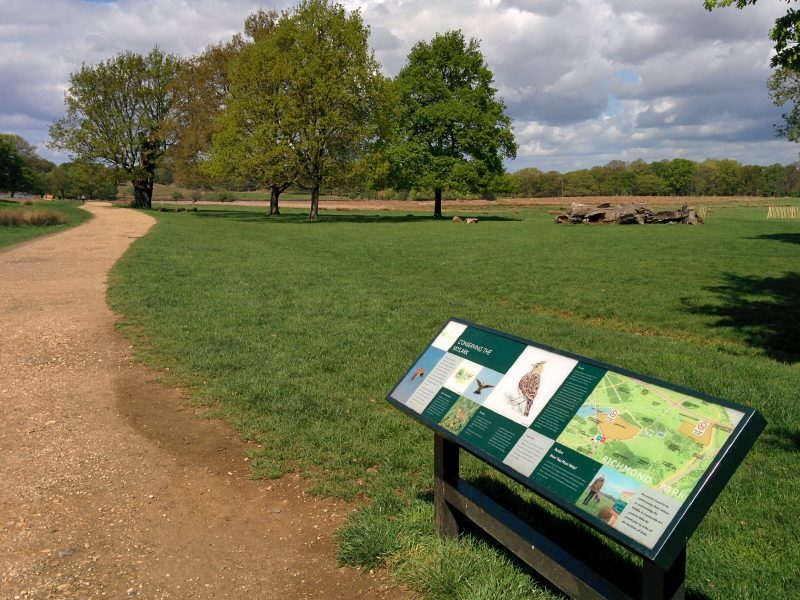 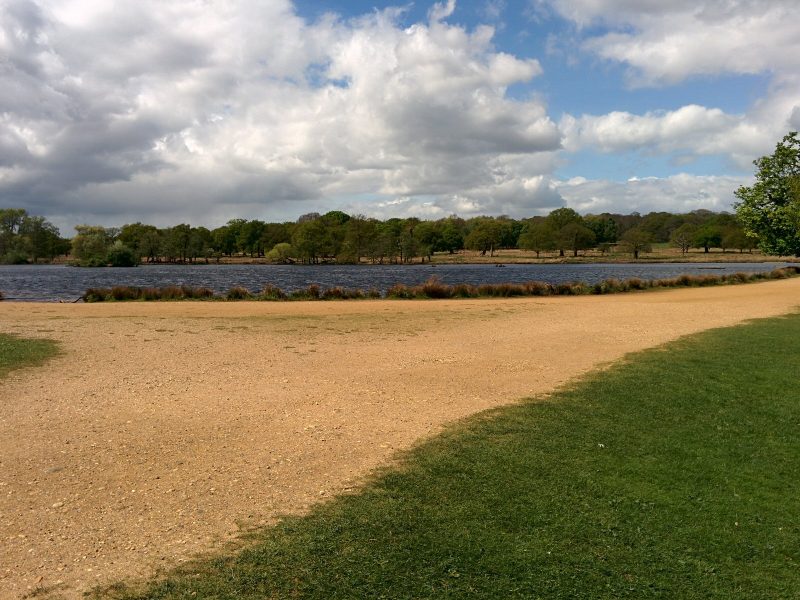 Including a “Very Old Hollow Oak Tree” with its own fence: 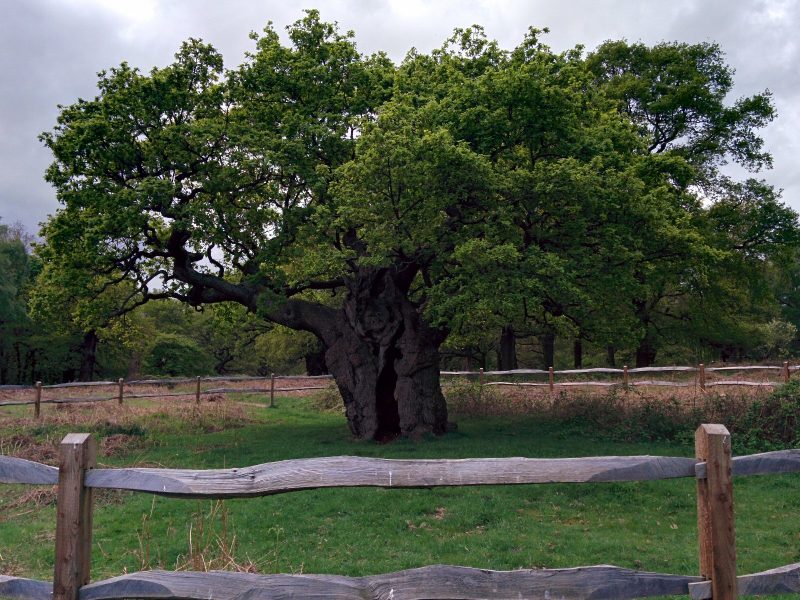 And a few deer sheltering under a tree: 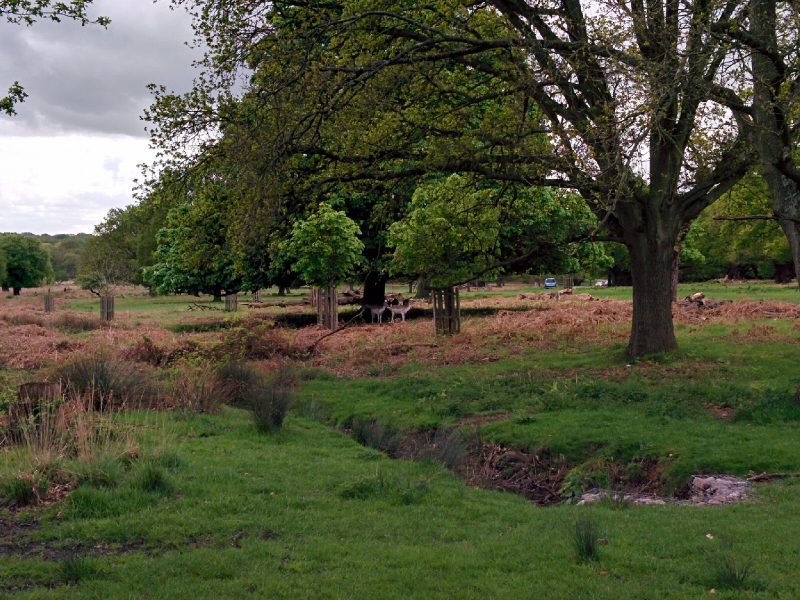 A short detour leads up to King Henry’s Mound, with extensive views to the west: 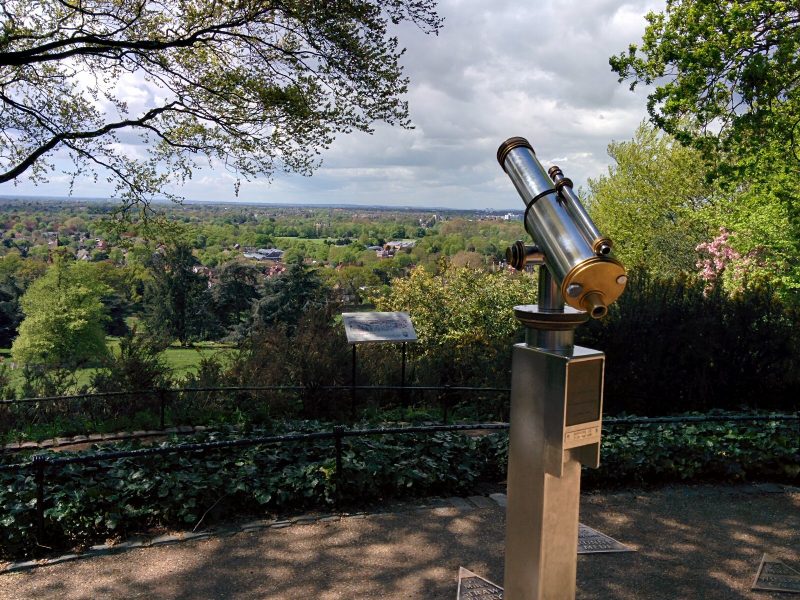 “Henry’s Mound is actually a barrow or burial mound, but legend says that Henry VIII stood here in 1536 waiting for a flare that would tell him that Anne Boleyn had been executed and he was free to marry Jane Seymour. From the top of the mound you can see St. Paul’s Cathedral through the telescope. This is a protected view – no tall buildings can be built to obscure the view of St. Paul’s Cathedral, 12 miles away.”

If you click on this image, and look VERY closely, you can just see the white blob of St Paul’s Cathedral framed by the trees (it was clearer through the telescope!): 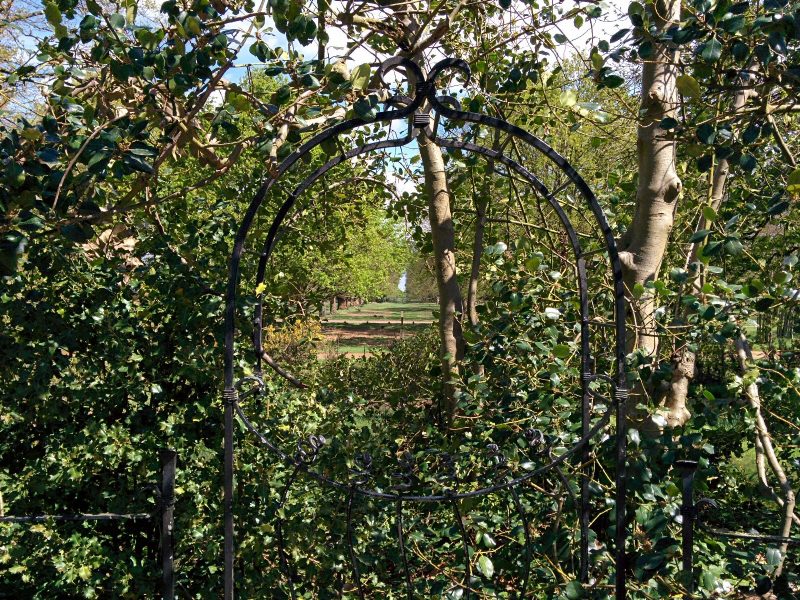 The route then drops down towards the River Thames: 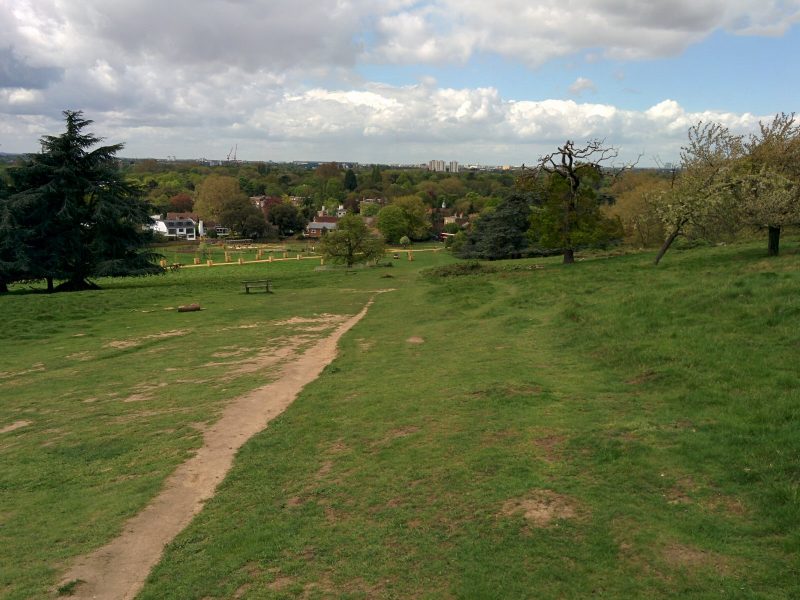 and a footpath leads to Petersham Meadows, with boats in the background: 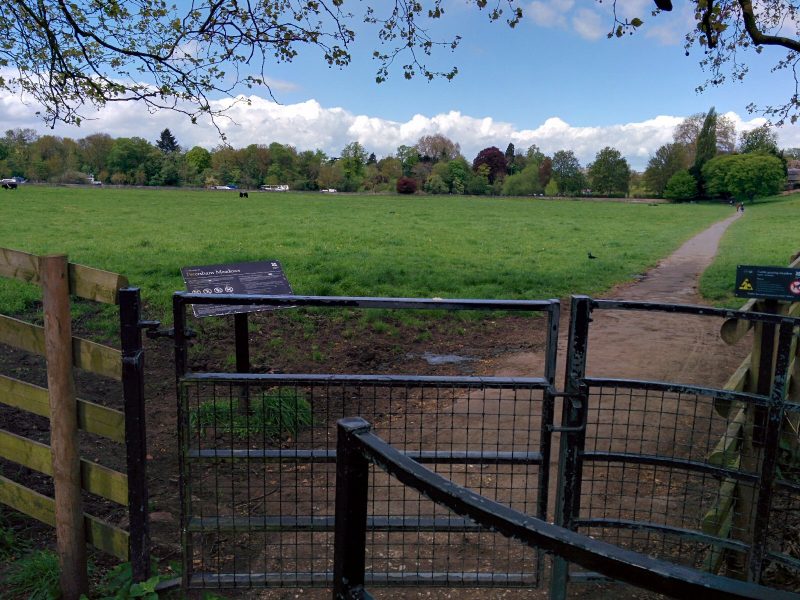 Then to the Thames Towpath itself and Richmond Bridge: 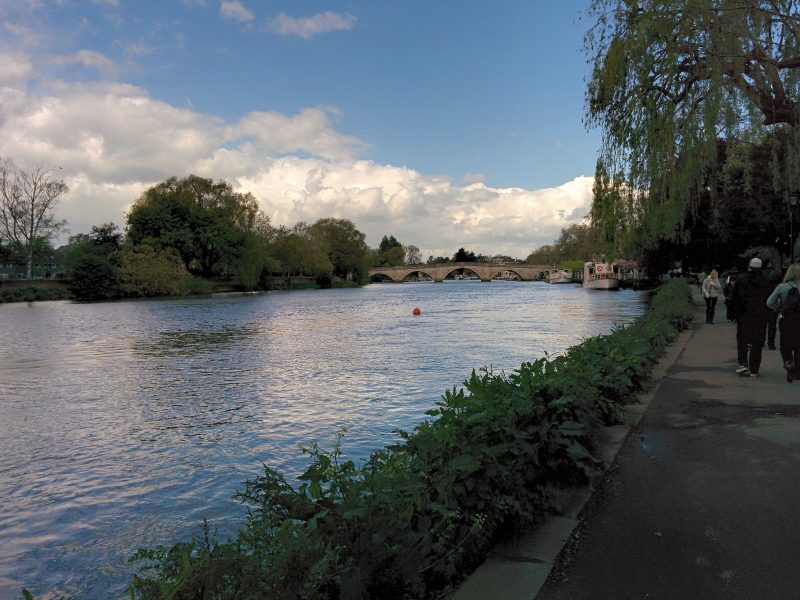 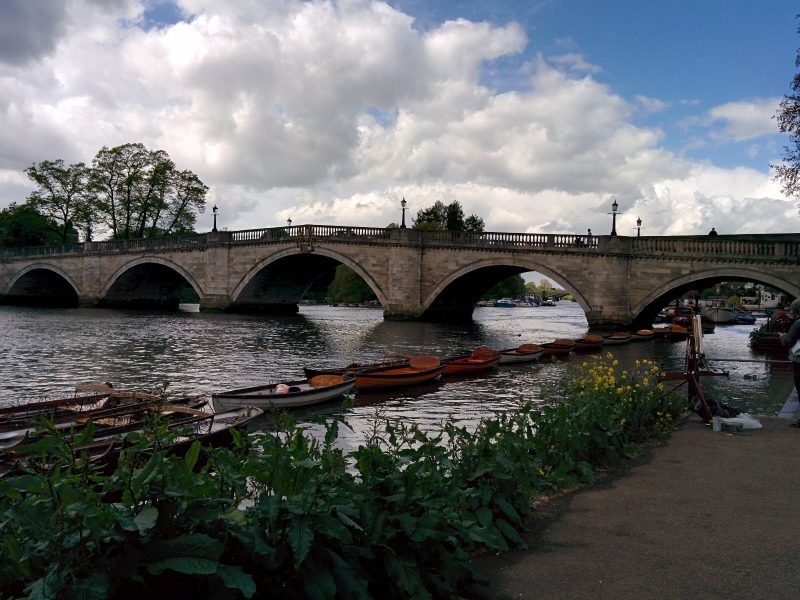 It was then a busy walk through Richmond to the station, and two trains home.

It was certainly nice having a Capital Ring walk that was mostly not on pavements or tarmac!