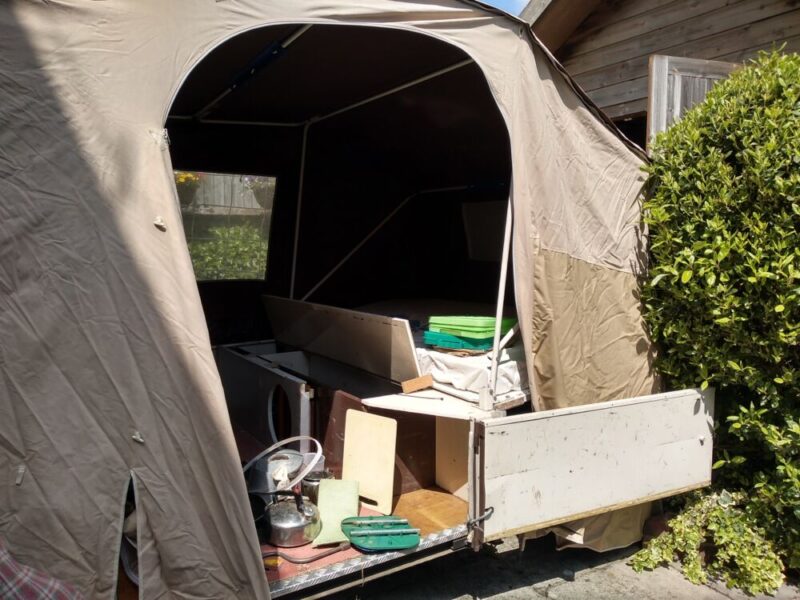 As we get ready to pass our old trailer tent on to a new home, I feel very sad that an era has come to an end. I don’t feel ready to give up camping just yet:-(

But oh, what times we had!

While I had a subscription to Gardener’s World Magazine, I sent off for some mini plug plants, which only cost the postage.  They arrived in what looked like an impossibly small package, but inside were 30 tiny plants in 30 tiny pots. 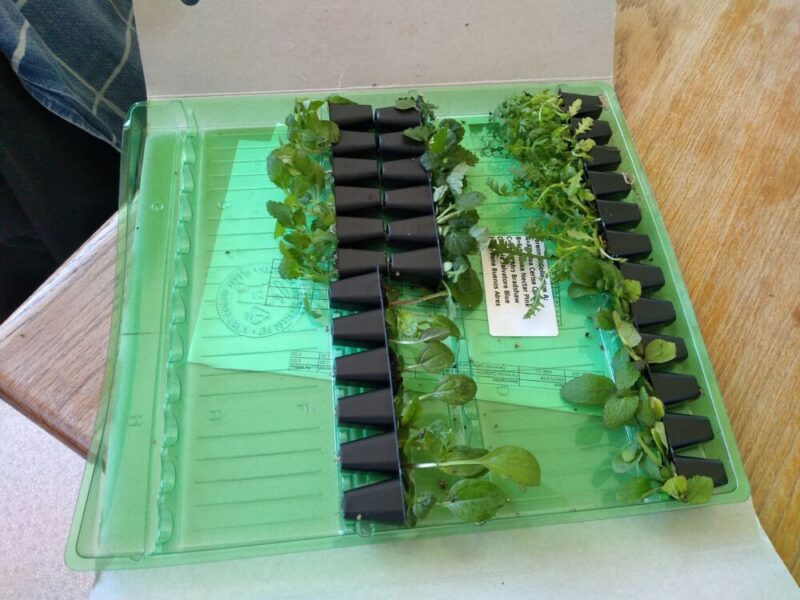 They were quite damp and seemed to be happy, but I thought it best to up-pot them pretty quickly. 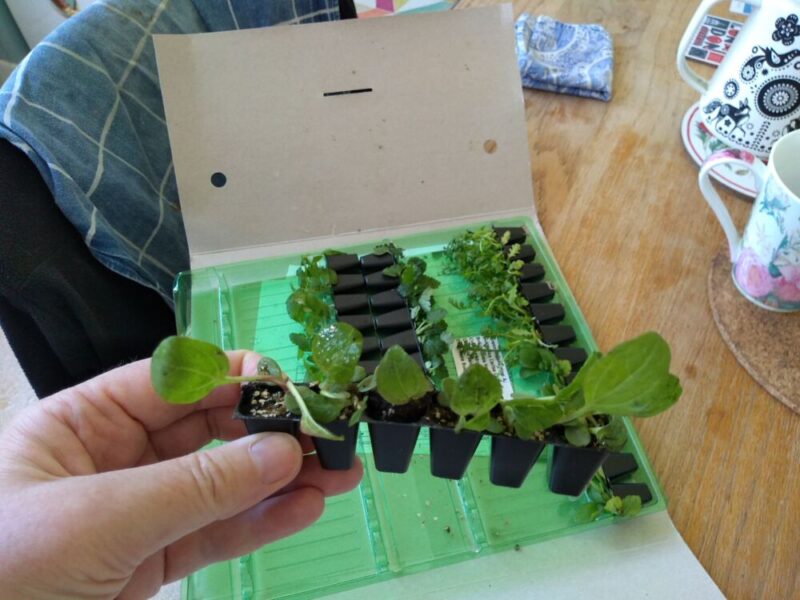 It turned out that some of the tiny pots actually held more than one seedling, but I put each pot’s worth into one of my home made paper pots. 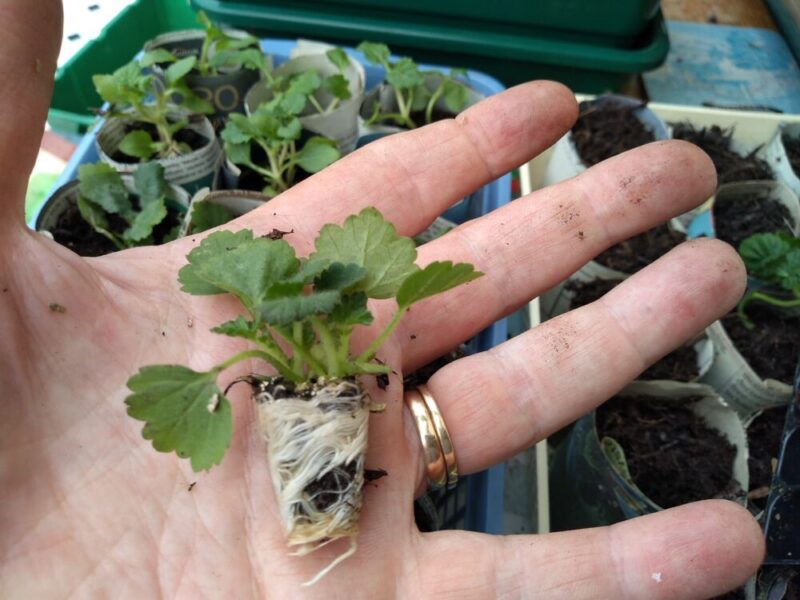 Now I am left with 30 tiny plant pots.  Can I find another use for them, so they are not single-use plastic? 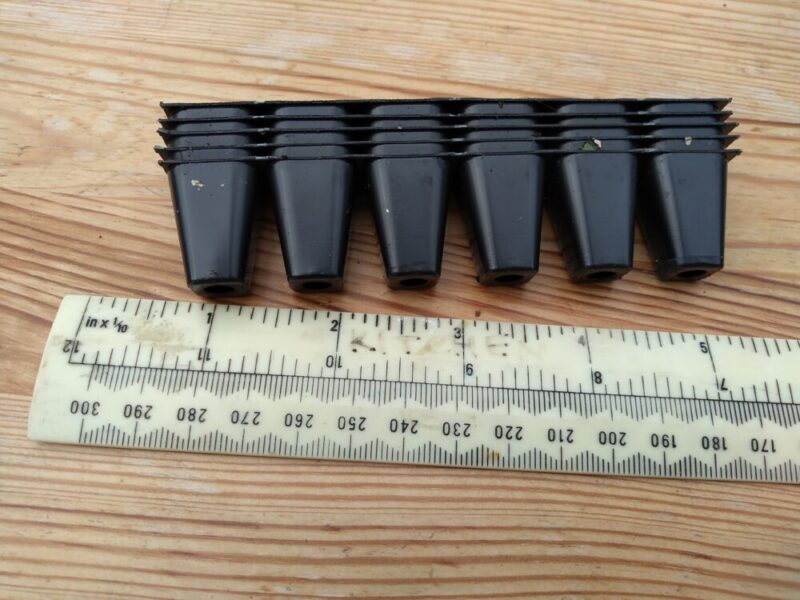 That is in quantity, not size!  For the past however many years, in the same way that we did when I was growing up, I have done a swap in May and October of the winter and summer clothes which are put in the camphor wood box while they aren’t in use.

This spring I was prompted to start early, and my aim was to reduce the (embarrassing) number of clothes I had so there would no longer be any need to keep the out of season ones separately. 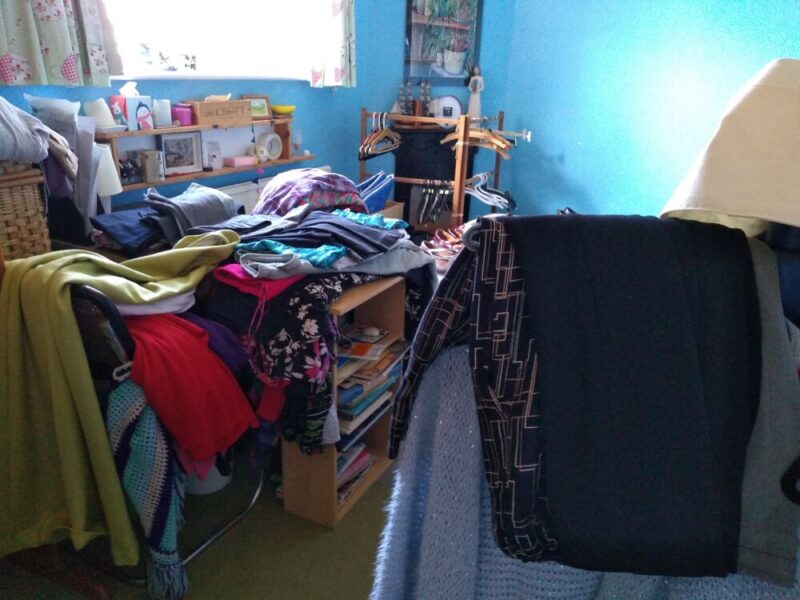 So I took over the front bedroom for several days and emptied my wardrobe and drawers onto every available surface.  The beady eyed may also see the kirtle and coif in the foreground.

The shoes alone covered the bed! 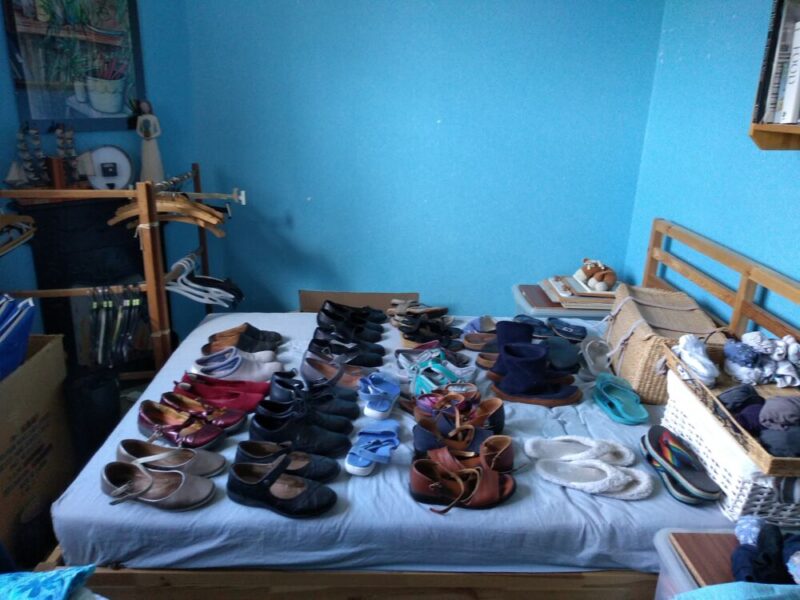 I almost succeeded in my goal – there are only heavy winter coats in the camphor wood box now, and there are four bags waiting to go to the charity shop.  Furthermore, the clothes I do have are better organised.  Result! 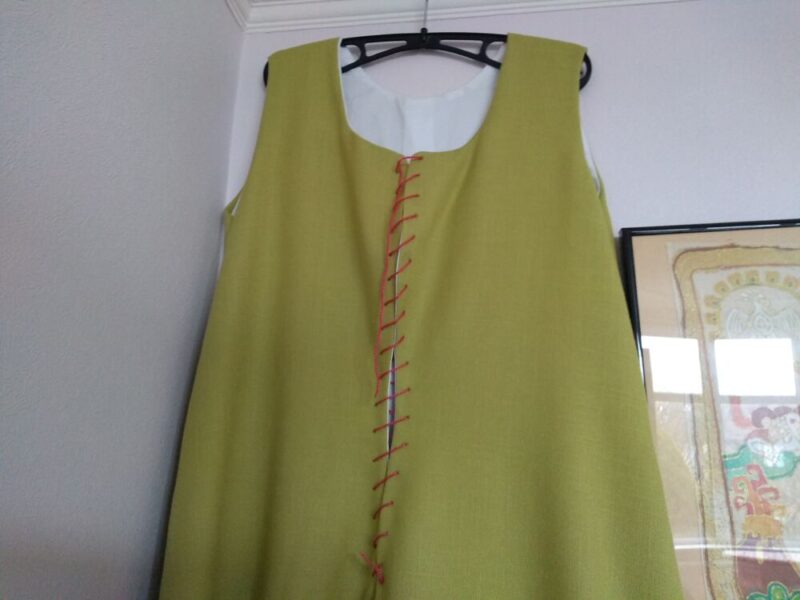 Having finished the construction of the kirtle itself, I then had to deal with the lacing;  making the holes down the front was easy enough… 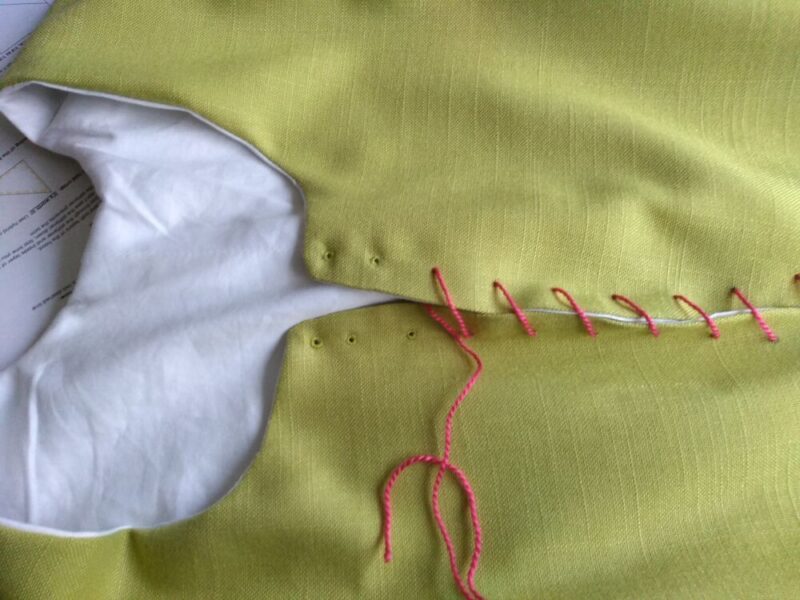 … but then the eyelets had to be hand stitched.  This was extremely fiddly! 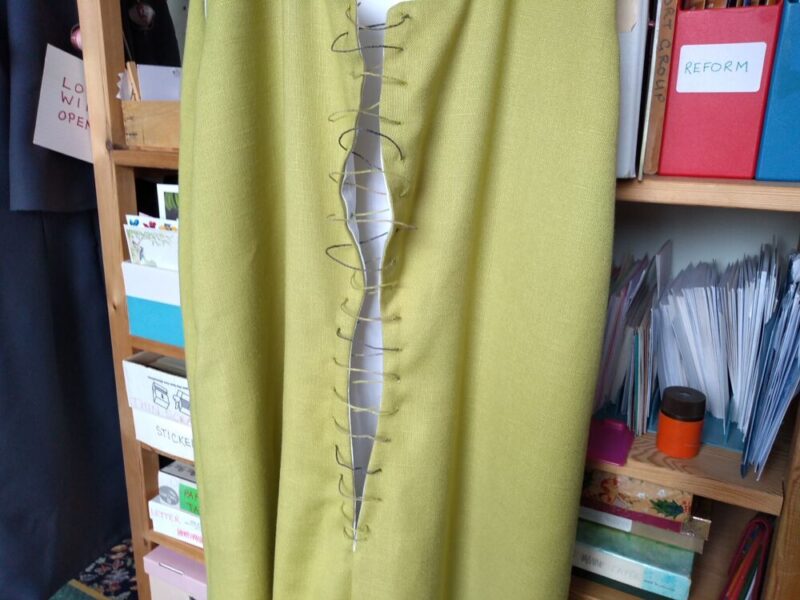 They weren’t too bad when I had finished, but they were rather too small, so I had to lace them with embroidery thread rather than cord.  However, once it was waxed, as per instructions from Gemma, it was more or less acceptable.

Meanwhile, I began making a coif.  This was made out of unbleached calico, which was what I had, and entirely hand stitched, which I was rather proud of! 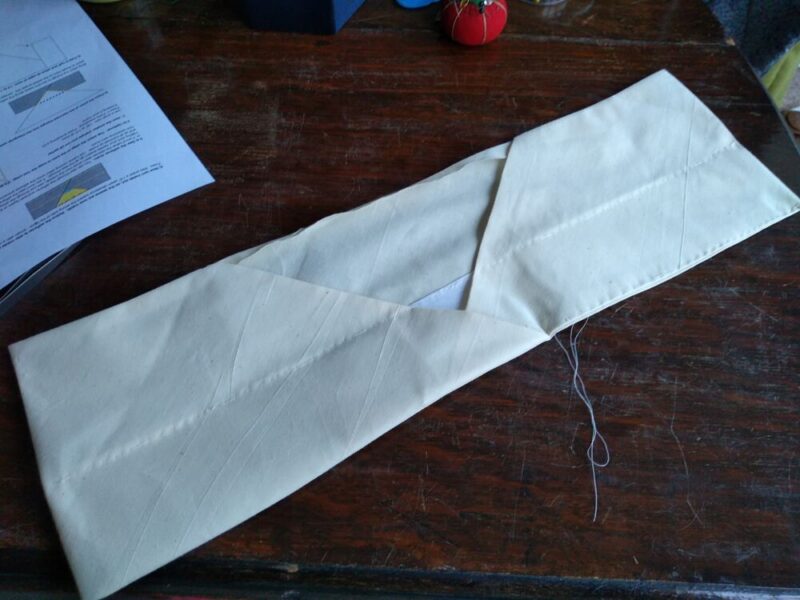 And so the medieval peasant costume is finished! 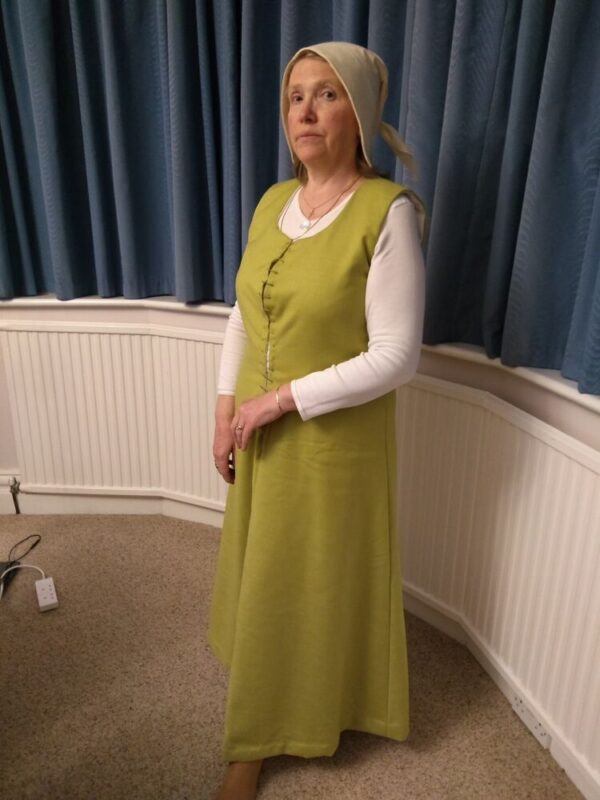 I will need to make a more appropriate undergarment at some point, rather than a 20th century thermal vest!!

As usual, I don’t wait to finish one project before starting another; I was inspired by Pastime Historical Dance activities to make a 15th Century kirtle. Having got Phil to help with the measurements – it’s hard to measure your own back, I first drew the pattern shapes on to the last remaining length of some old cotton sheeting. 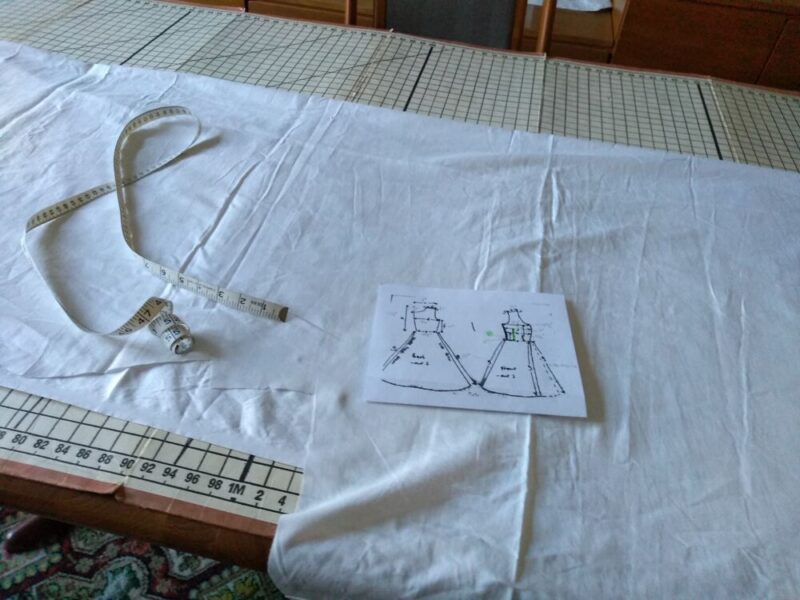 This was quite a challenge, as I am not exactly the shape anticipated by the sketch (ahem), but eventually I got the pieces cut out.  The bust looked a bit odd, though. 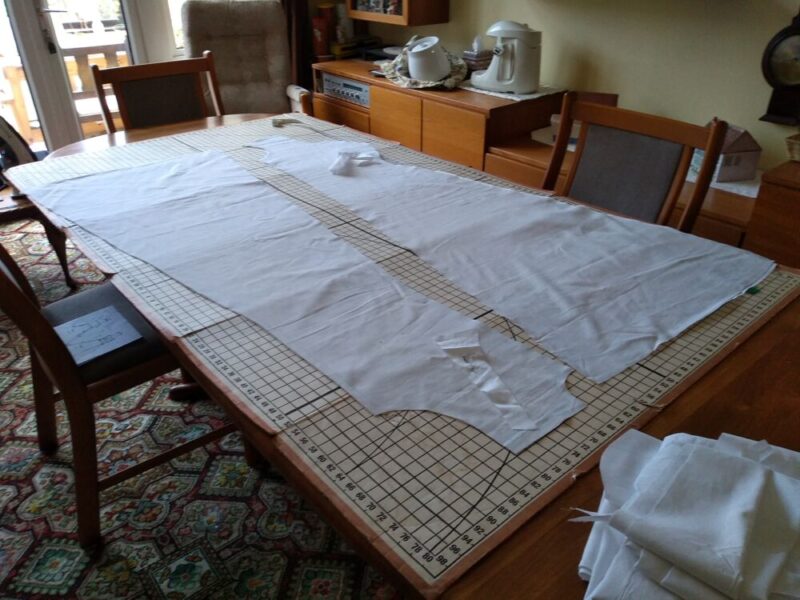 Having done a rough fitting, and adjusted said bust, I cut out the pieces from the main fabric. 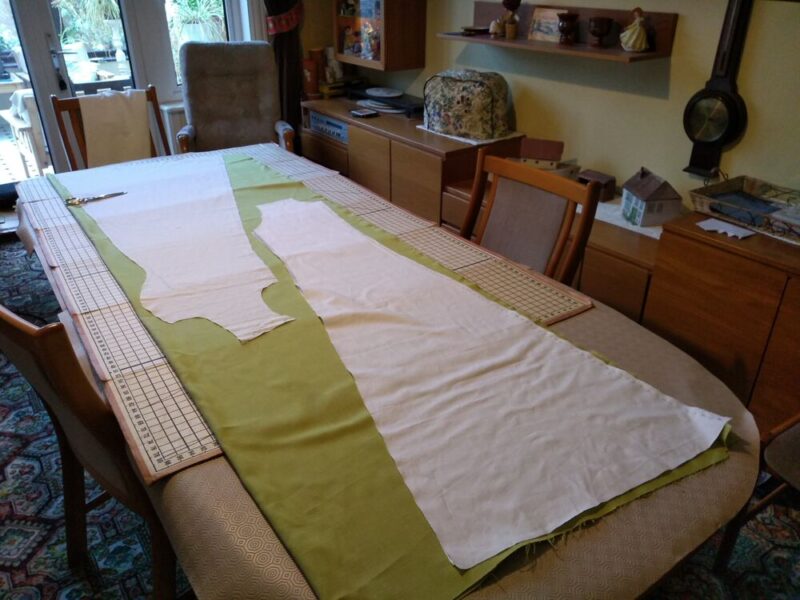 The next step will be to stitch the pieces together! 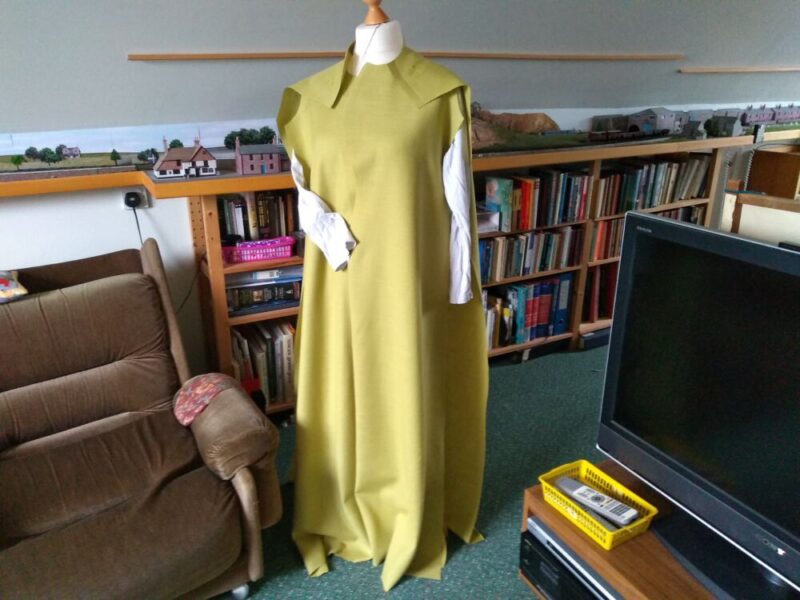 That undergarment is a (fairly) modern nightie – my Tudor chemise is too bulky to fit under.  That’s a problem for another day.

Phil has been using a wicker tray to contain bits and pieces on the front seat of the car.  Unfortunately, the tray has holes in the side, so the smaller items had a tendency to fall out.  So I made a liner for the tray.  It didn’t take long, and I am quite pleased with how it turned out. 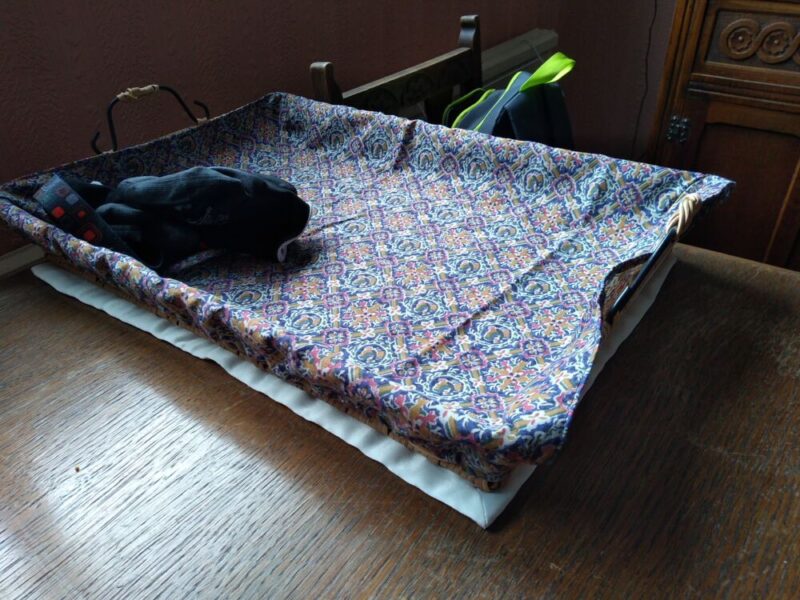 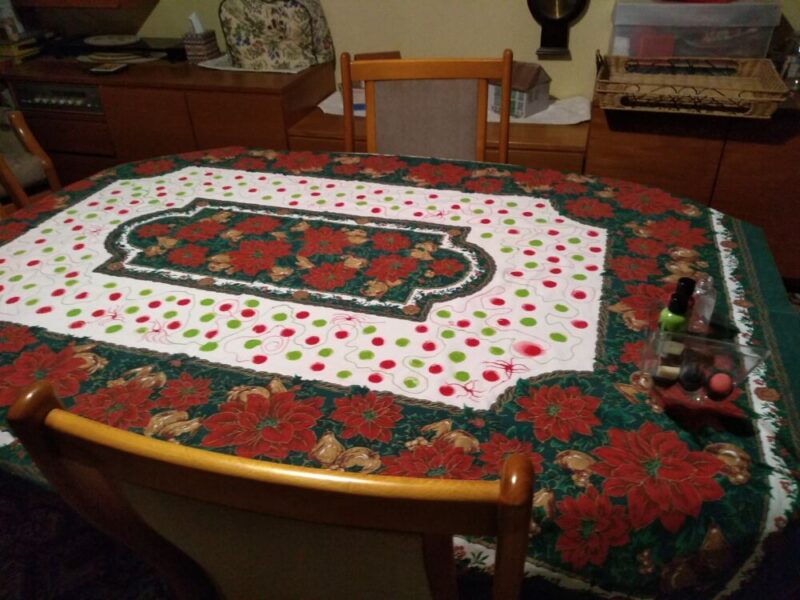 The white space on this tablecloth had two issues: It was unbalanced with regard to the border, and it showed every mark!

So I decided to have a play and add some additional colour.  I’m quite pleased with the result.

… I’ve been playing around with screening off the chaos which is our loft space, for when I need to do more formal video calls – the bench meeting this evening, for example. 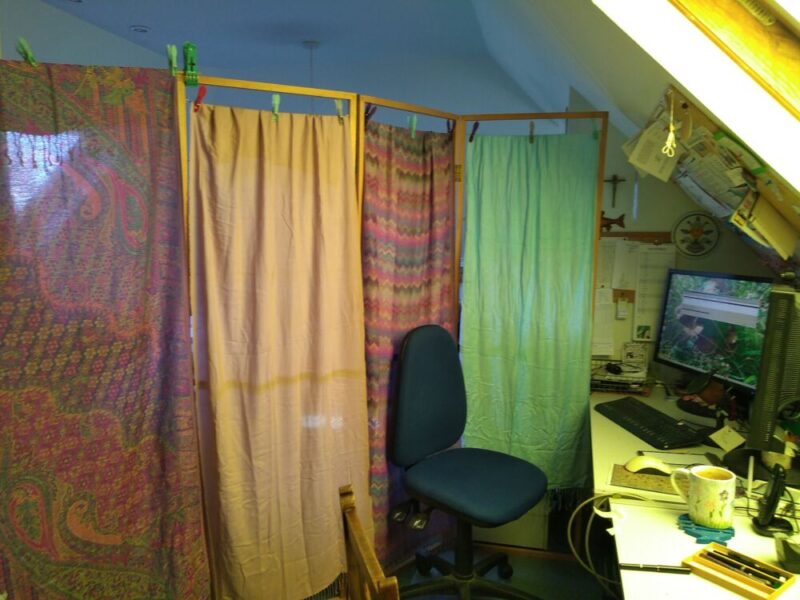 If I’m to use this idea for real, I’ll have to iron the scarves!! 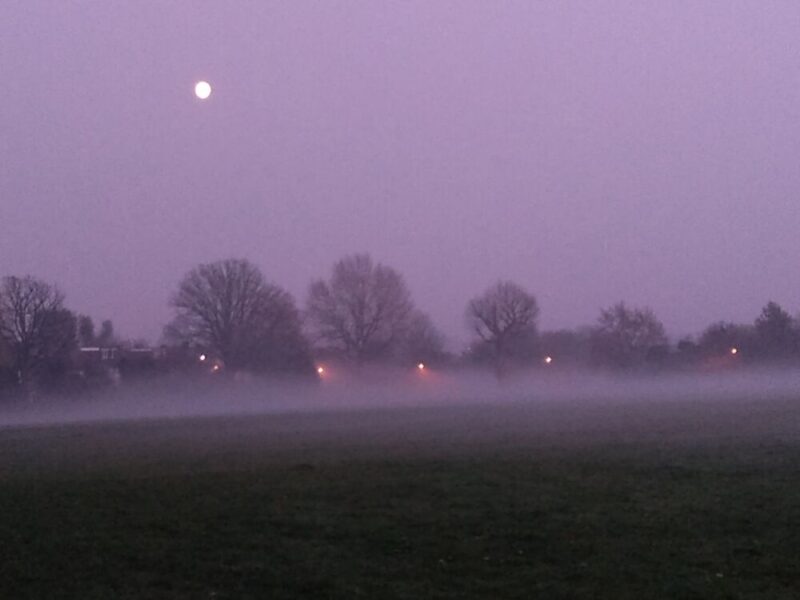 It was a particularly stunning evening at Poverest Rec on Saturday – the moon was large, orange and low, and the mist covering the area was only about six feet deep, giving a weird effect which this photo doesn’t really capture. 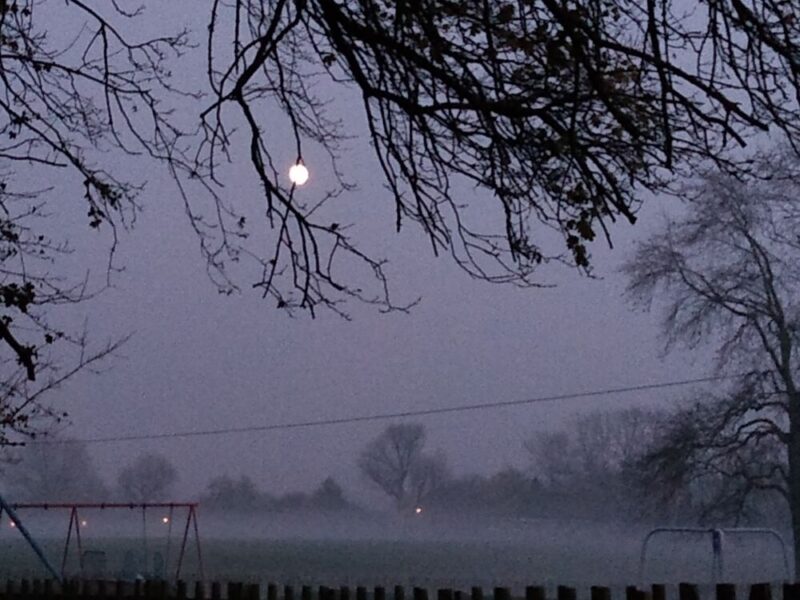 The air was very still and it was not at all cold.  Altogether quite a lovely walk!

The top of my sewing drawers was getting cluttered, so I decided to tidy it up.  Which, of course, led to sorting out one of the drawers. 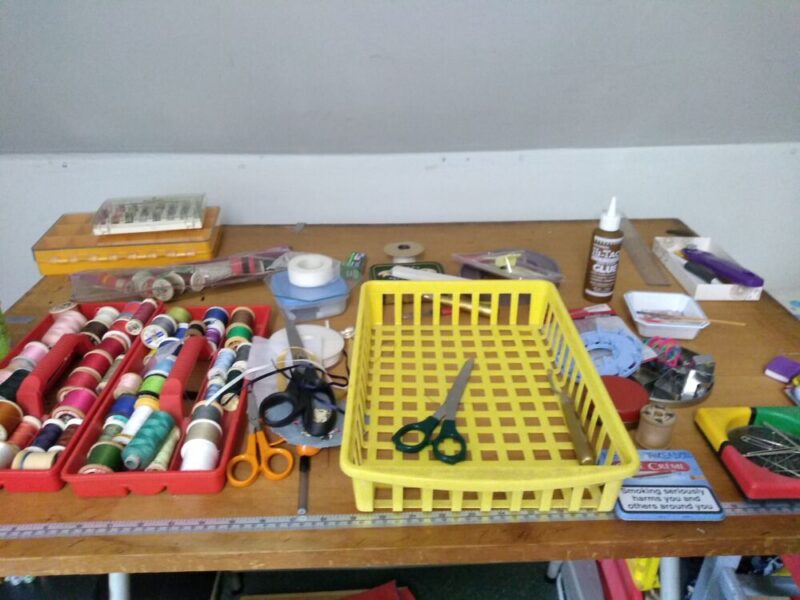 As is the way with things, this led to sorting out my eaves cupboard… 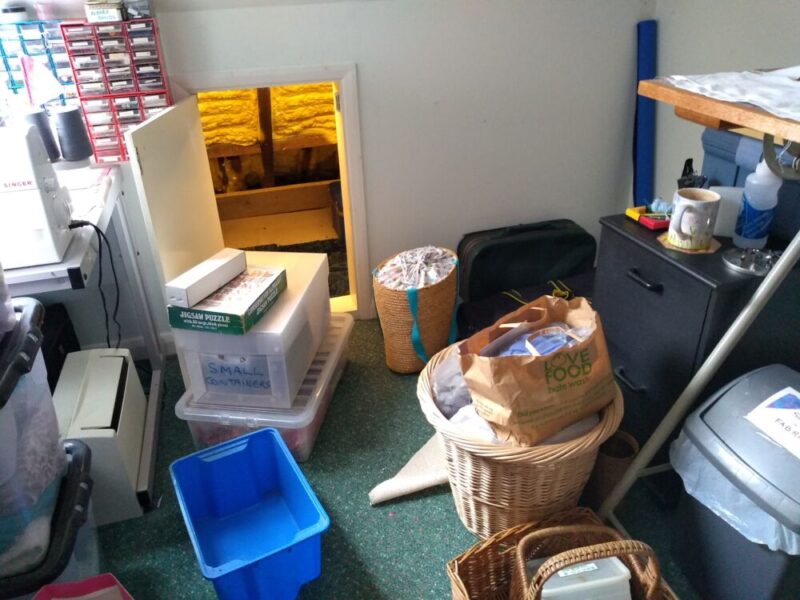 A real sense of achievement!  And so to actually doing something now that my sewing space is ready for action: 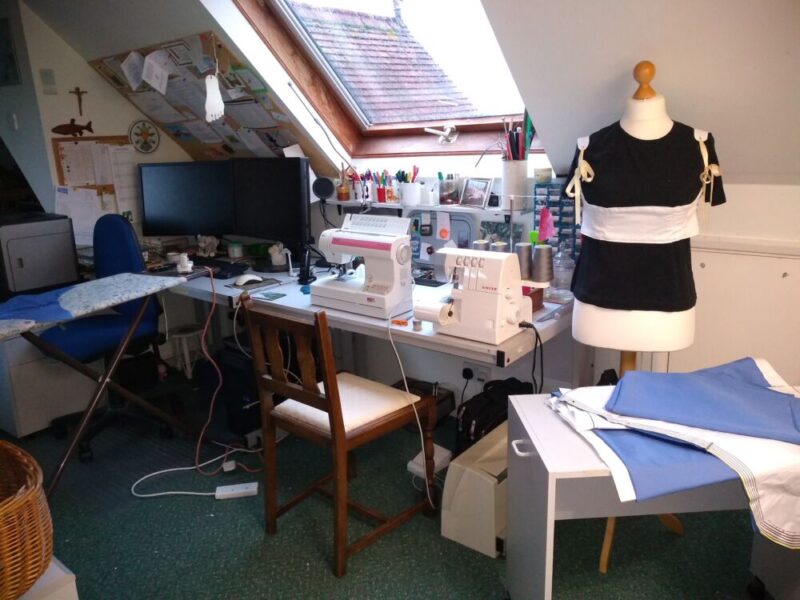